October 04, 2017
Who ya gonna call? Well, you don't have to call anyone actually, but If you're stuck for a fancy dress idea for Halloween or an 80s party, then these popular Ghostbusters costumes fit the bill perfectly.

Of course, the franchise became popular once more after the release of the new film in 2016. The re-boot received mixed reviews from critics, and the original 1984 movie still remains THE one to watch!

These costumes are ideal for groups and couples, and heads are sure to turn when a group of ghostbusters are seen patrolling the streets!

The biggest range of outfits for both adults and kids (at the lowest prices) can be found on ebay and Amazon with both 1984 and 2016 themes.

The men's costume consists of a beige jumpsuit with a large, inflatable backpack and authentic Ghostbusters logos. The ladies outfit has a smaller backpack and includes either a dress or jumpsuit (two styles are available), hat and belt, and also has the logos. 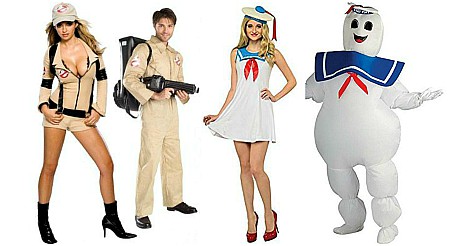 Alternatively, a low cost option is to buy a costume shirt... 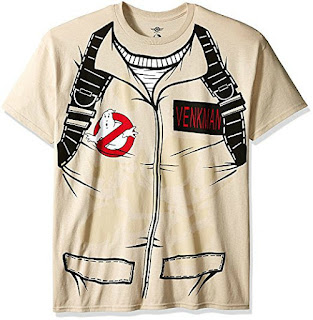 Ghostbusters Costume Shirts at Amazon US

Another popular choice through our Ghostbusters website page is the slimer costume which is also available for both children and adults. 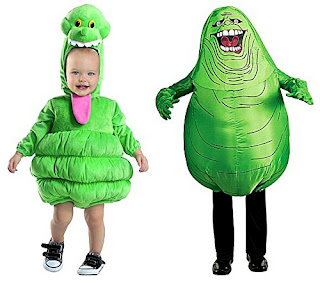 You can also dress-up as the giant Stay Puft marshmallow man. He is one of the best-known characters from the film who created chaos near the end.

This dress with matching hat looks cute and is available in three sizes in the U.S., and two sizes in the UK. It's easy to wear and a quirky costume idea that is sure to get you noticed at any party or event.

This inflatable costume has received a lot of positive feedback from customers and would be a real head-turner at a carnival or any party. Be warned, though, it can get very hot inside the costume, so it's not ideal in warmer weather.

There are also many suppliers selling this costume on ebay, and it's well worth checking the site as the prices are very competitive.

How about one of these T-shirts;

If you can't be bothered dressing up or you're strapped for cash, then why not consider a simple T-shirt like the one above? I've seen many people turn up to a party wearing a T-shirt as their costume. There are many other accessories available and you can read about these on the Ghostbusters page at my website SimplyEighties.com