September 11, 2018
I was a huge fan of Michael J. Fox's films back in the day, and still like to occasionally watch his 80s movies from time to time, including Back to the Future and Teen Wolf. The latter would make the ideal theme not only for an 80s costume, but also for Halloween, too, which is fast approaching as I write.

In the 1985 movie, the lead character Scott Howard (who was played by Fox) suddenly finds himself transforming into a werewolf, often at the most inconvenient moments. However, he learns how to control the change and use it to his advantage in the Beavers basketball team.

Thankfully, there is an awesome ready-made fancy dress costume available which is actually a popular seller through my website (simplyeighties.com) throughout the whole year, believe it or not. Of course, during the run up to Halloween there is an even bigger demand for the costume. We do not sell the costume directly, but instead, link to a trustworthy supplier on Amazon for a small commission.

The outfit comes in two sizes and includes the jacket, vest, gloves, wig and beard.

If you have an eye for a bargain, then you may also like to check all the numerous suppliers selling Teen Wolf Costumes on ebay

These are brand new, "buy it now" items from leading costume suppliers, so there is no need to bid.

You can also view the full range of Teen Wolf Costumes on our website. 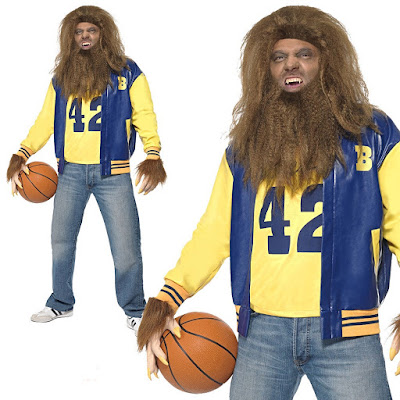