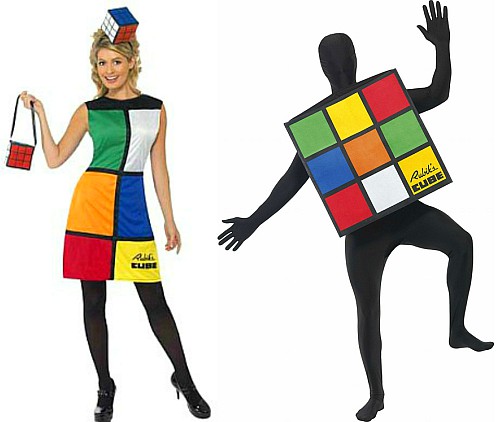 Think of 80s toys, and the Rubik's Cube is often the first one that springs to mind. Launched in 1980 (it was actually invented in 1974), the cube went on to become a true sensation, and also the world's No.1 toy. Who would ever have thought that it would still be popular today? The iconic image of the cube is now widely used on retro products, artwork, clothing, nostalgic websites etc., and there are still numerous books available on how to solve the cube.

For this post, I'm going to look at Rubik's Cube fancy dress costumes for adults. I'm also going to take add the positive and negative points of each costume. Here are my views for the first outfit above;

+ The costume above is a popular choice for ladies through our 80s website (simplyeighties.com), and it's probably the cute matching hat and handbag that does the trick - a great idea! The full outfit is available in a range of sizes, too.

- That headband will probably become annoying after a while!

Before you rush to buy it, there are other some other nice choices to consider...

+ This officially licensed 3D effect dress is a little more straightforward and is all-in-one. No extras are needed, just slip it on and you're ready to party! If you're looking for something quirky, it's ideal.

- It's a little expensive and there are cheaper options on the page. Bear in mind that it will be difficult to sit down in such a costume, and going to the lavatory will be tricky!

This costume features a 3D cube with holes for your head and arms.

+ It's a unisex design and if you're planning to go to an 80s party/event as a couple then this would be ideal. This outfit is also available at the U.S. Amazon, although is described as being for women for some reason.

- Reviews suggest that this outfit is rather flimsy and difficult to sit down in. Therefore, you may want to choose one of the other options on this page.

Another option is this Rubik's second skin costume which can also be bought in the U.S.

+ It really stands out, and includes a concealed under-chin opening so you can reveal your face, as well as a zip at the back. Unlike the 3D costumes, you will be able to sit down in this one.

- It's quite expensive, and it's not ideal for those of you who are claustrophobic. You'll have to take it off to go and do your business in the washroom!

An even easier dress-up idea is a T-shirt. I'll be honest. I've been to several parties wearing a 1980s t-shirt with a funny 80s wig in the past. Let's look at the positives and negatives;

+ It's cheap. There are lots of designs available. The fact that you can wear a t-shirt long after the party has finished, and possibly for years to come makes it extremely cost-effective.

- You may be called a cheapskate or a tight-fisted git.

Best places to buy them;

I highly recommend checking out Redbubble where you will find lots of exclusive and interesting designs created by independent artists. They ship worldwide, too.

There are dozens of designs available, and here are a few examples. Please note that most of these are available in a range of different colours

I love the look of this tees which looks like it's been in your wardrobe since the 1980s! This tee is available in plus sizes up to 3 x X-large.

There are several outfits available based on the classic party game Twister for both men and women. This theme is ideal not just for 80s events, but for just about any decade from the 1960s onwards. The game was actually invented in 1966 by Charles Foley and Neil Rabens.

Well, I hope you have found this post useful, and here are some useful links;

You can read more about 80s fashion at my website simplyeighties.com.

80s Costume Ideas for the UK at simplyeighties.com

80s Costume Ideas for the U.S. at 80sfashion.clothing